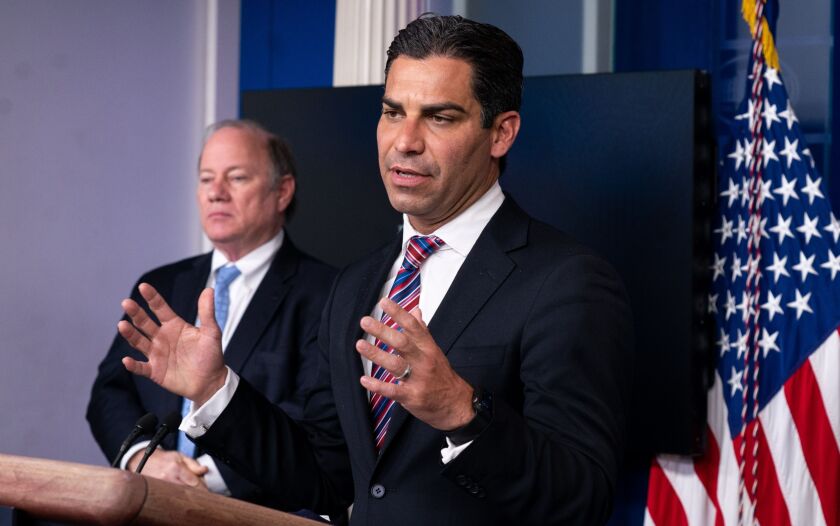 Two major governments in South Florida are dipping their toes in the waters of the cryptocurrency.

Officials from Miami and Miami-Dade Counties believe that cryptocurrencies like Bitcoin can make local government faster and more efficient, while also establishing their communities as technologically advanced centers of innovation.

Cryptocurrencies are decentralized and digital lines of computer code that are digitally signed each time they are transferred from one owner to the next. The chain of custody is kept in books called the blockchain.

A worker inspects computer rigs at a cryptocurrency mining farm in Russia in March. An enormous amount of computing power and the associated power consumption are required to create and manage the blockchain ledger.

Miami Mayor Francis Suarez sees the positive potential of cryptocurrencies, from paying city workers with Bitcoin to setting up a Bitcoin treasure fund with city money, to paying taxes, fees and fines by residents and businesses with cryptocurrency.

“I am firmly convinced that if and when Amazon and / or Bitcoin introduce Bitcoin as a payment structure, the dam will essentially break, since at this point in time there is talk of a very high transaction volume using Bitcoin,” Suarez told Reuters. “I just wanted us to be up to date and somehow ahead of the game.”

Alan Konevsky, Chief Legal Officer at tZERO, a global broker-dealer for digital securities recognized by the Securities and Exchange Commission, praised the city’s willingness to take advantage of blockchain technology and products like Bitcoin and use them as a means of payment.

“I think this is a very important step on that road to adoption,” said Konevsky. “The most important thing about using something of value as a means of payment, which is different from something you speculate on for financial gain or as a store of value, is if you are only using it as a means of payment for people, then the key concept is acceptance . “

The actual trading history of Bitcoin and other cryptocurrencies paints a picture that looks more like a speculative investment game than a stable store of value.

The price of a bitcoin in US dollars – $ 57,260 on Wednesday morning – has increased more than sixfold in a year, according to Coinbase, a publication on blockchain and cryptocurrencies.

“If employees were paid in crypto, recipients would face relatively high volatility,” said John Hallacy, founder of John Hallacy Consulting LLC. “The dollar fluctuates against other currencies around the world, but generally holds its value, at least in the short term.”

Miami Mayor Francis Suarez is passionate about bitcoin and cryptocurrency applications in his city.

On Tuesday, the Miami-Dade County Council voted on a bill to set up a task force to examine ways in which cryptocurrencies like Bitcoin, Ethereum, Litecoin, Cardano and Polkadot could be used for the county business.

The task force would investigate the benefits of having the county “accept cryptocurrencies as a means of payment for taxes, fees and services provided by the county.” This is an application of blockchain technology that has the potential to improve convenience and save costs. Before introducing any of these new payment methods, a study of the cost, feasibility and security of these systems should be conducted. “

Last month, the County Commissioners approved a 19-year $ 135 million contract with FTX, the cryptocurrency exchange platform, to rename the AmericanAirlines Arena, home of the NBA Miami Heat, the FTX Arena.

Jeff Roth, a government planning expert, said he had been following the situation in Miami closely and believed the city was on the right track.

“The Mayor of Miami is making a strong signal that he wants the city to be the place to be for innovation in this area, and as a local government expert, I think that’s a great thing,” Roth told The Bond Buyer. “If I were to advise the Miami Mayor on Bitcoin, I would tell him and other local executives to fully consider it and say not just Bitcoin but cryptocurrency in general and think about ways to test it.” Roth said a lot of exciting things are happening in the cryptocurrency space.

“It really is the local governments that are at the forefront,” said Roth. “And they want to welcome companies that want to innovate in this area.”

However, he said there must be clear public policy goals and metrics to secure these when a new system is set up. Turning to Miami, he said he thinks the public will benefit from job creation and investment in the city’s infrastructure.

According to CoinMarketCap.com, over 6,700 different cryptocurrencies with a total value of more than $ 1.6 trillion were publicly traded in February. Bitcoin made up about 60%, Ethereum about 15%.

“The lure of cryptocurrency as an investment is the rise in price that cryptocurrency, particularly Bitcoin, has seen. Because the supply of available bitcoin is limited, wider use can put pressure on the price, which is attractive to some investors, ”wrote Barbara Turley, director of investment research at Commerce Trust, in a report last week. “While there are mixed opinions about investing in cryptocurrency, many investment professionals believe that it is a speculative investment.”

According to Nigel Green, CEO and founder of deVere Group, a financial advisory and fintech company, Bitcoin investors should be prepared for much tighter government control.

On April 14th, Coinbase, the largest cryptocurrency platform in the United States, went public on the Nasdaq.

“Coinbase’s direct listing is a really significant day for the Cryptoverse,” Green said, adding, “as they become increasingly embedded in the global financial system and critical as the Nasdaq direct listing will reach a broader investment base than that.” Investors, the usual crypto evangelists, face much tighter government scrutiny. “ 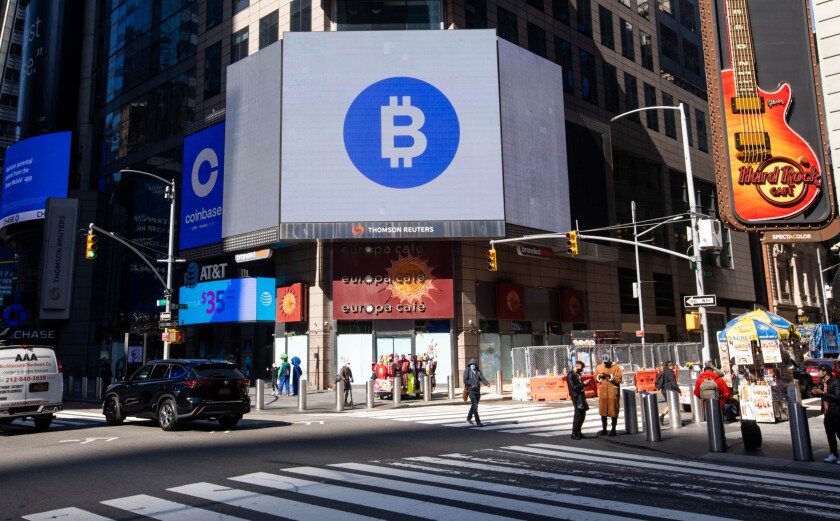 Monitors in New York City display the signage of Coinbase and Bitcoin during Coinbase’s IPO in April.

He said governments, central banks and regulators would want to protect the currency’s status quo.

“However, Bitcoin investors shouldn’t be put off by the likelihood of increased government scrutiny,” he said. “Major draconian defeats are unlikely as digital currencies are increasingly viewed as the future of money – even by traditionalists.” You can’t put the ghost back in the bottle. “

In the US, the SEC last week postponed its decision on approving an exchange-traded fund until June 17. The delay came when the SEC was due to rule on the application of VanEck Associates Corp., one of ten issuers that had petitioned the SEC about Bitcoin ETFs.

Municipalities aren’t the only ones interested in harnessing cyber currencies in new ways.

Companies like AT&T, Microsoft, and Home Depot are already accepting Bitcoin as a form of payment, while Starbucks and Whole Foods plan to do so soon.

In the real estate sector, the Los Angeles Times reported that Bitcoin is now being accepted for payment of residential and commercial rents at the Grove Mall and other California properties owned by developer Rick Caruso. The Times said the Caruso is also planning other initiatives, such as using blockchain technology to support a reward and loyalty program for buyers.

In the wealth advisory space, JPMorgan Chase is reportedly preparing to launch an actively managed Bitcoin fund to its wealthy clients this summer, while BNY Mellon will soon launch a digital asset service. Mastercard has announced that it will support cryptocurrencies directly on its network.

“Another problem is that crypto is not really considered a real currency right now. The Federal Reserve said that too, ”Hallacy said. “From a tax perspective, crypto is viewed as an investment.”

The blockchain, which supports cryptocurrencies, is created and managed – “mined” as it is usually called – and uses enormous amounts of computing capacity that require enormous amounts of electricity. Miami city and county officials are silent on the impact of carbon emissions, even as they face an existential threat from the rising seas caused by climate change.

Turley said there are several other risks associated with buying cryptocurrency as an investment, the most notable being price volatility.

“Additional risk considerations include potential future competition and regulation. Janet Yellen, former chairman of the Federal Reserve and current US Treasury Secretary, said there were still important questions about the legitimacy and stability of the cryptocurrency, calling it an extremely inefficient way of processing transactions, “Turley said.

“The future cryptocurrency landscape may look very different from now as improvements are made over time to offset the weaknesses in today’s options,” she said.

Must you put together for one more Bitcoin, altcoin market crash this weekend?

Bitcoin warning, can gold use this to its benefit?